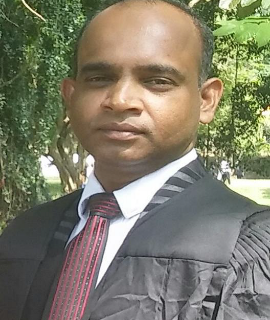 Title : Ecology of dogs in sri Lanka and transmission of rabies among dogs and wildlife

Free-roaming dogs are the main source of infection for well over 90% of human deaths due to rabies. The current population of dogs in Sri Lanka is estimated to be 2.5 million and they can be categorized as owned dogs, semi-owned dogs (also called ‘community dogs’), and ownerless stray dogs. The percentages of dogs in each of these categories in different geographical areas of the country are not known. Of the estimated dog population, vaccinations undertaken in the country have ranged from approximately 33% in 2005 to 56% in 2015 and 44% in 2020. Several geographical areas such as rural and sub-urban areas have a high proportion of free-roaming and stray dogs that have access to patches of jungles where a range of wild animals such as mongoose (Urva brachyurus, U. edwardsii, and U. smithii), golden jackal (Canis aureus), giant squirrel (Ratufa macroura), palm cat (Paradoxurus hermaphroditus), palm squirrel (Funambulus palmarum), monkey (Semnopithecus spp. and Macaca spp.), bandicoot (Bandicota bengalensis), civet cat (Viverricula indica), wild cat (Felis chaus) and recently spotted deer (Axis axis). Rabies has been diagnosed in specimens submitted for testing from all of these wildlife species. Indian flying foxes were found to be infected with a novel lyssavirus, named Gannoruwa bat lyssavirus, which caused rabies-related clinical symptoms and neuropathological changes. The rabies outbreak that occurred in 2020 in 17 jackals from Kaluthara district, which resulted in two human deaths, suggests that a sylvatic cycle could exist, although a spillover of the infection from dogs to jackals is also a possibility. This is similar in rabies positive among three spotted deer’s out of 17 suspected animals in Homagama area in 2022. The absence of a wildlife disease surveillance system in the country is a limitation in early detection and dealing with rabies in wildlife. Therefore, there is the possibility of transmission of rabies from dogs to wildlife and vice versa. One of the major challenges in rabies control in Sri Lanka is to ensure a long-lasting herd immunity among the stray dog population. Identification of food waste dumping sites, habitat mapping of locations where stray dogs potentially mix with wild animals, dog surveys and rabies surveillance among wildlife, are also important to facilitate an overall successful rabies control programme. The essential components for achieving the objective of zero human deaths due to rabies by 2030 include collaboration between the different government departments and institutions that are responsible for activities related to rabies control, provision of adequate human and physical resources to each of them for implementing their mandates, and a joint national action plan based on the One Health approach. What will audience learn from your presentation? (Try to list 3-5 specific items) ? Ecology of dogs in Sri Lanka ? Vaccination coverage of dogs and strategies to control dog rabies Sample Abstract Template ? Threat to wild animals ? Control strategies to transmission of dog rabies to wildlife ? Collaborative prevention programmes based on one health approach. ? Wildlife disease surveillance, constraints and opportunities. ? How to Achieve zero human deaths from dog mediated rabies